From the moment Kathleen Poulos saw a photo of Riley, a sweet Yellow Lab on Northern California Lab Rescue’s Facebook page, she knew the pup belonged with her family.

Riley was a rescue with a heap of medical issues, including a genetic disorder, several allergies, and a history of physical abuse. As a nurse, Kathleen knew she would be able to manage Riley’s health care. Riley is a joyful dog, and quickly became an essential member of the Poulos family, with whom she has lived with for nearly eight years. 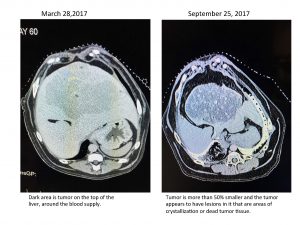 In March 2017, Kathleen noticed Riley was losing a great deal of weight and had undigested food in her stool. Kathleen quickly scheduled a visit with a board-certified veterinary internal medicine specialist.

Unfortunately, the internist diagnosed Riley with cancer in the liver. The prognosis was extremely grave since the tumor was wrapped around the hepatic artery, which constricted blood supply to the liver.

Kathleen, a cancer survivor herself, was devastated and overwhelmed by the diagnosis. But after the shock and sadness wore off, Kathleen’s survivor and nursing instincts kicked in and she moved forward to find a solution.

Kathleen was already familiar with PetCure Oncology since she had formerly worked on the marketing side of the company and even assisted in the opening of its first cancer centers. So she immediately contacted her former colleague Dr. Eric Boshoven, a board-certified radiation oncologist with PetCure Oncology at Arizona Veterinary Oncology (AVO). After reviewing Riley’s scans, Dr. Boshoven knew she would be a perfect candidate for stereotactic radiation (SRS/SRT), an advanced and noninvasive form of radiation therapy. This advanced therapy treats tumors by delivering radiation with sub-millimeter precision to kill the cancerous cells.

Without hesitating, the Poulos family drove six hours from their home in Orange County, CA, to Phoenix, AZ. Two weeks after Riley’s diagnosis, she received three sessions of SRS/SRT.

Riley seemed to handle the treatment well, experiencing a minor upset stomach as the only side effect. She continued to be her happy self and ran the halls of the hotel with her fur sister, Gabbi.

Although Kathleen had already known about PetCure Oncology’s expertise and compassionate care, she was extremely impressed and moved by the level of empathy and attention Riley received from the staff. “The team bent over backward to fit Riley into the schedule on such short notice,” she said. 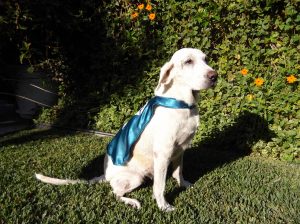 At the first re-check in September, just 6 months following treatment, the tumor had shrunk by 50%. Riley continued to show progress at her second follow-up in November.

To celebrate Riley’s treatment success, her family has several milestone celebrations throughout the year. Every few weeks, they enjoy a fun and special outing, new toy, or meal with the entire family.

Riley continues to be a happy dog that loves to run around and play with her growing collection of toys. Kathleen appreciates that PetCure Oncology has provided Riley with such a great quality of life over the past year.

The family remains hopeful that Riley will reach a few more milestones. “Riley is certainly a fighter,” said Kathleen. “And she is happily kicking.”

Our team is ready to offer you guidance on your pet’s cancer journey. To speak with a member of our Pet Advocate team, please call 883-PET-HERO.