Home / In The News / Pet Hero: Sunny Days for Sam 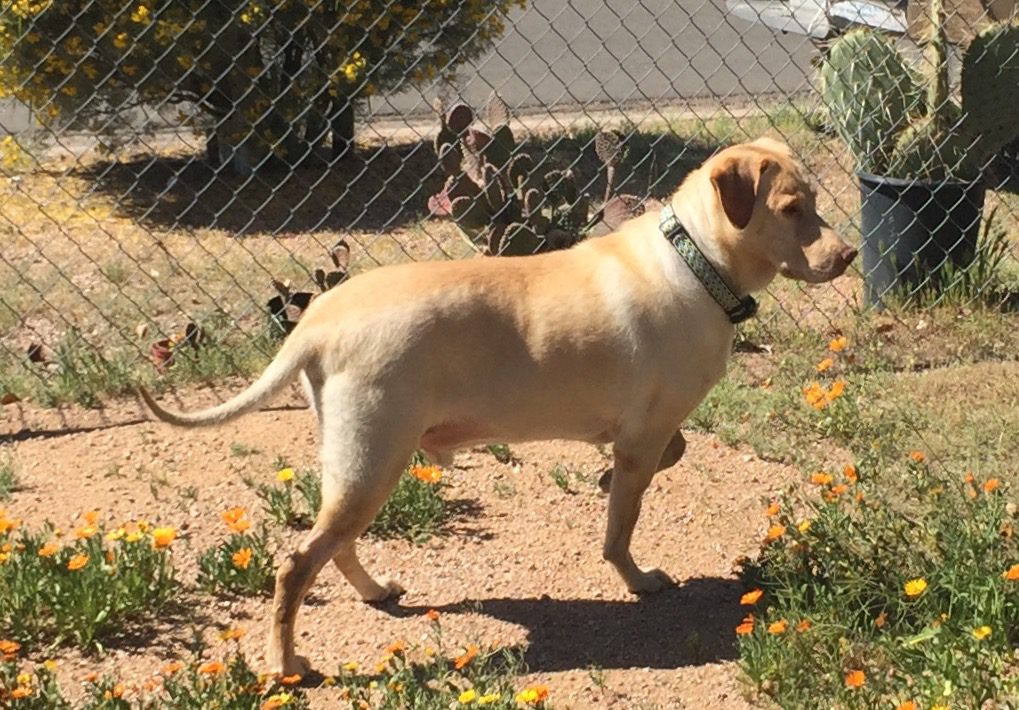 Sam was two years old when Don rescued him from an acquaintance. Sam had been kept on a short chain outside in all types of weather conditions. Don knew he could provide Sam with a better life, and he was able to convince Sam’s owners to give him up. He has been Don’s constant companion ever since, including a move from Mesa, Arizona to Cabo San Lucas, Mexico, where the Scegiel family lives now.

In October 2015, Don noticed that Sam was beginning to snore louder than usual. He didn’t think much of it, until one day in January Sam started bleeding from his nose. Alarmed, the family took Sam to the local veterinarian for an exam. An X-ray showed a large growth in Sam’s naval cavity. The growth had become so large it was blocking airflow into both nostrils. Unfortunately, the veterinarian in Cabo San Lucas told Don that no clinic in the entire Baja region had the capability and equipment to perform a CT scan or rhinoscopy for further testing.

But giving up was not an option for Don.

He arranged for Sam to travel with a friend see a veterinarian in Mexico City. After a CT scan, rhinoscopy and biopsy, Don’s fears were confirmed. The tumor was cancerous and aggressive. It was too large to be removed surgically, so radiation therapy was recommended. Sadly, the family found that radiation therapy was unavailable throughout all of Mexico. The veterinarian said the closest place they could find it was Arizona.

After searching Google for “canine radiation therapy Arizona,” Don discovered a new cancer treatment for pets called stereotactic radiosurgery (SRS). This new technology was offered at PetCure Oncology at Arizona Veterinary Oncology (AVO) in Gilbert, Arizona. Don was able to make an appointment for the very next week.

The only flight Don could find to accommodate Sam landed in San Diego, California. From there, they drove to Arizona.

“What a day!” Don recalls. “The whole time I was sobbing. I kept thinking I just can’t put my child to sleep. He is only eight, and he has a few more years left. He was so strong and healthy. But the feeling I had seeing him suffocating and how uncomfortable he was—that was the hardest thing to live with.”

During the initial consultation with PetCure Oncology at AVO, board-certified radiation oncologist Eric Boshoven, DVM, DACVR (RO), told Don that Sam’s tumor was a “9” on a scale of 1-to-10. The tumor had eaten through the bone plate and it was starting to push on the brain membrane. Don also learned that because Sam’s cancer was in the late stages, there was an increased chance that the cancer would grow back.

But, along with this heartbreaking news, there was hope. SRS could treat Sam’s tumor, and it could also be repeated in the future to kill the tumor again, if necessary. Knowing there was a way to treat the cancer in the future sealed the deal for Don. It was worth it to keep his beloved Sam with him as long as he could.

After just three sessions of SRS, the treatment was complete. Although Don lost 15 pounds from the stress, Sam experienced no side effects and Don was relieved to see Sam breathing and sleeping better each night. Sam’s one-month check-up showed that he was continuing to improve. His next follow-up appointment will include a CT scan to monitor the tumor’s reaction, and Don is hoping to see a significant decrease in its size. 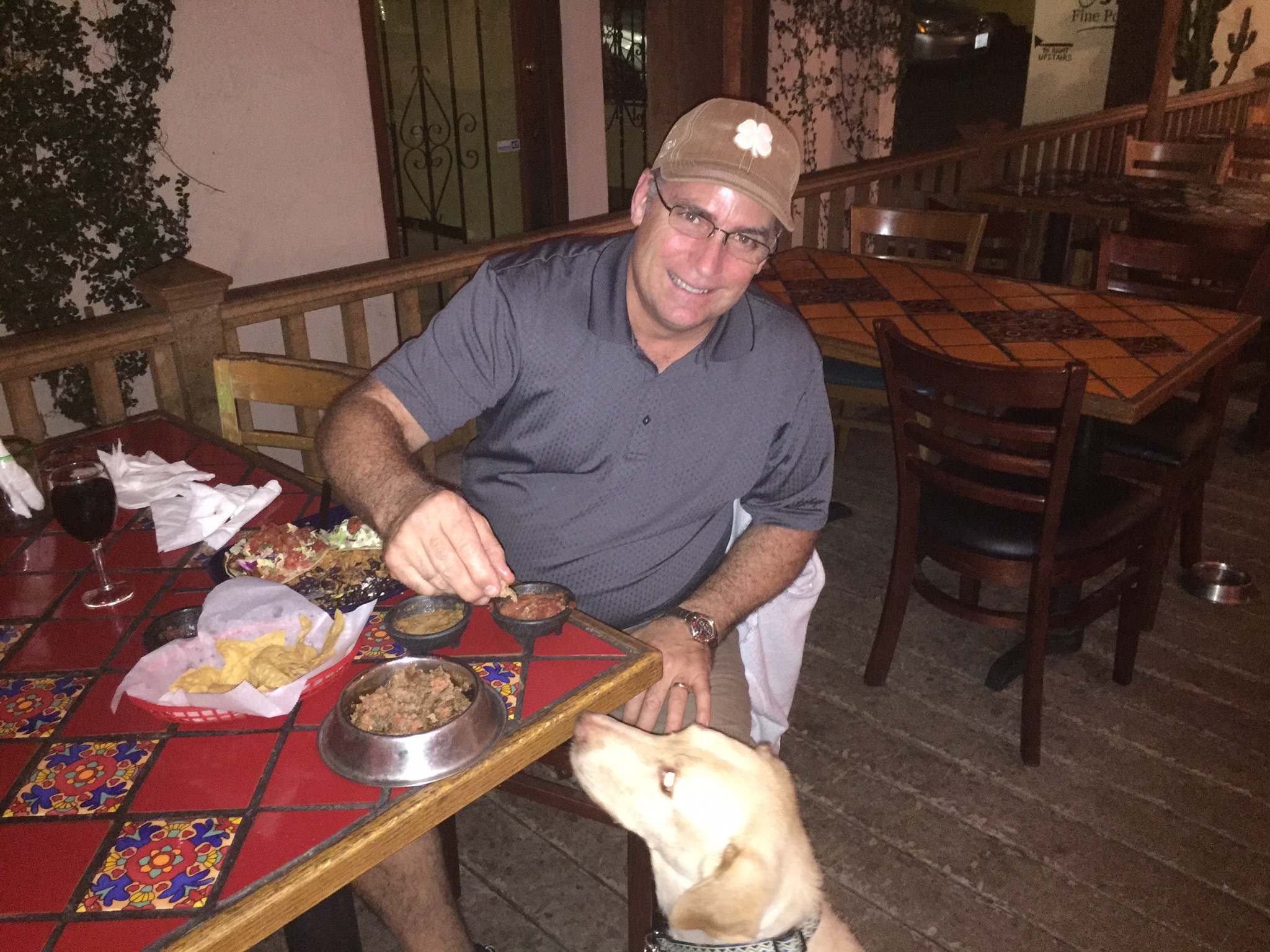 Don and Sam eating in Old Town San Deigo, CA on their way back to Cabo, Mexico after Sam’s treatment

I’m happy with our family now, and we will do some more treatment as needed in September. Hope! That is what another client told me in the waiting room when he noticed me sobbing during Sam’s first treatment. He shared his dog’s results with me, and that gave me the hope. DON’T LOSE HOPE! There are many things they can do now to help our hairy kids. I hope Sam’s story gives you hope.

Sam is back to relaxing and resting easy with his family in Cabo San Lucas. The Scegiel family has since adopted a one-year-old Golden Retriever named Marley. Don is happy to report that Sam is busy running and playing with his new buddy. 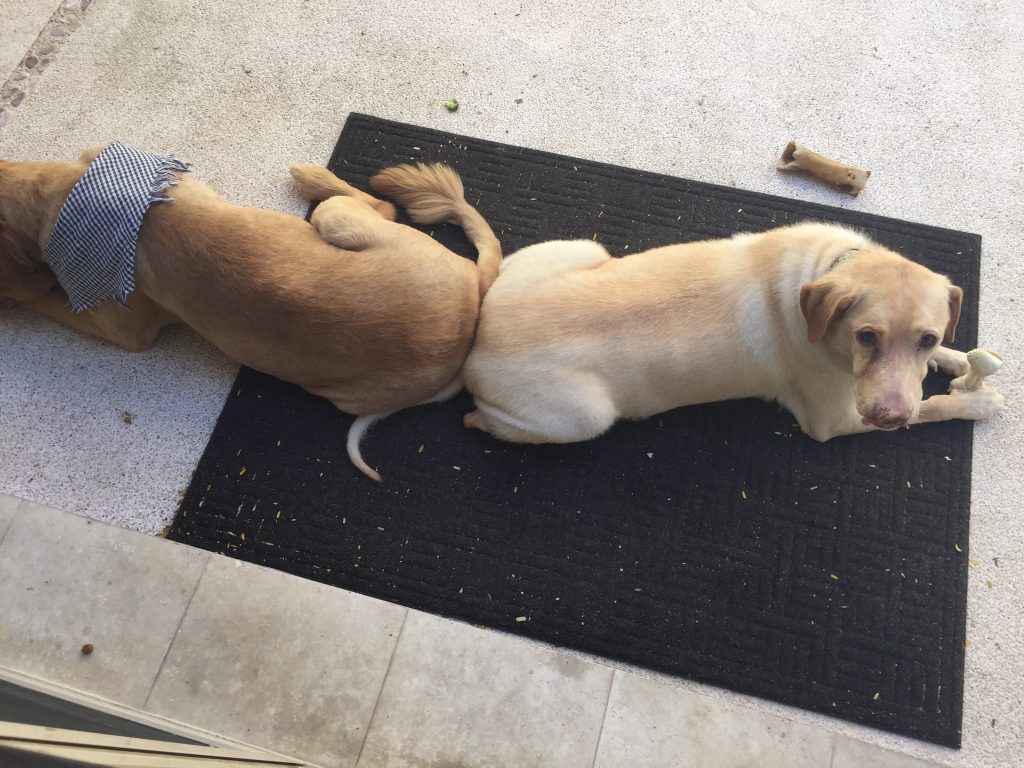 Sam (R) back in Cabo with new buddy Marley